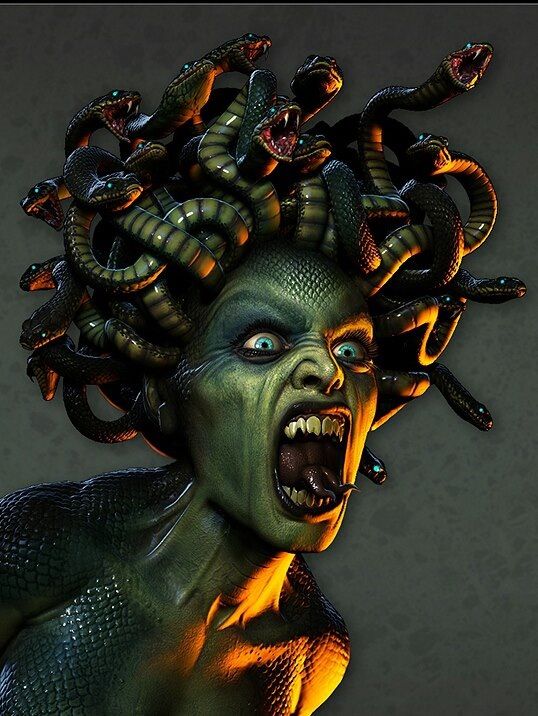 Well, here I am, back writing snarky BS at the request of no one.  But I am an intrepid satirist, and I just read a story that I just have to mock.

Note that some men’s temptation to ogle may be tempered by the fact that our Victoria Secret model has snakes for hair, is armed, and is holding a severed man’s head.  Possibly such a vision, in the flesh, would deter many men from using suave opening lines on her at the local tavern.  Such as, “Hey baby, can I charm your snakes? “

But I digress from the mocking.  Why we need an anatomically correct, naked playboy-centerfold-inspired woman displayed in pubic…er, public, strikes me as a worthy subject to debate.

And why is she holding a severed male head, you ask?  What is the message this is supposed to convey?  If I were looking at this without having read the article, a few possibilities might occur to me.

The actual message is one inspired by the #metoo movement.  The inspiration is the statue of Perseus holding Medusas head.  This is a Greek myth, in which Medusa is a female monster, (there is no proof that she looked like Hillary Clinton).  Herewith in summary:

Because the gaze of Medusa turned all who looked at her to stone, Perseus (hero) guided himself by her reflection in a shield given him by Athena and beheaded Medusa as she slept. He then returned to Seriphus (ancient Greek city) and rescued his mother by turning Polydectes (villain) and his supporters to stone at the sight of Medusa’s head.

If it sounds like Perseus was a hero, and Medusa a horrible murdering beast, you would think the story was inspirational, right?

Apparently if you are a feminist, you are not inspired but repulsed.  Instead such women felt that what is needed is a story where the female of the piece kills a male.  Voila, a statue is commissioned.  In it, Medusa (the ugly murderess), kills Perseus the hero.  But hey, apparently a myth in which the hideous evil butchering female triumphs over good by killing a male hero, is what we need to kill toxic masculinity.  Or something incoherent like that.

As an aside, if feminists wanted this statue to prove that women can be mass murders too, or something, why is she nude? Would she not be better pictured wearing all black and a mask, like a Portland Antifa rioter? And shouldn’t she also be about a dress size 18, the average for American females? Is this not an example of objectifying women?

So, coming to a park in Manhattan soon, you ladies and your daughters can saunter over to 100 Centre St, NYC.  Check out the hot broad holding up a male hero’s head, and dream of killing off some cops or firefighters.  That’s a popular concept now, anyways.  Try to ignore the fact that this brilliant piece of inspirational art was created by a man.  (No, I do not have his model’s phone number).

Seriously, you can’t make this stuff up.