You would think that designing appealing cars would be a prestigious, glamourous position.  You might also believe that it would be highly paid, given the perceived impact on sales of selling good looking, well designed cars.  And therefore such people would be the most talented designers in the commercial world.

The visual evidence on the highway does not support this logical perception.  Car designers clearly are bottom of the heap talent wise, at last for several leading car makers.  Nothing else can adequately explain the number of either hideous or unnecessarily boring cars blighting todays roadways.

Herewith I announce the Pacer Awards, named for the ugliest production vehicle of all time.  These, in my humble and uncontestable opinion, are the most wretched examples of design among cars currently available brand new in dealers’ showrooms.

#10  Mini Countryman.  This is officially a big Mini, this makes as much sense as jumbo shrimp or an intellectual Nazi.  The Mini has long been a one trick pony, selling a tiny car suitable for parking on sidewalks in European cities or being pulverized by Hummers in a traffic accident.  Mini executives said, hey we want 2 choices of cars.  Let’s make one in which two schnauzers could actually fit in the rear seat.  Here it is, in a sort of turd brown metallic finish.  Feast your eyes on this eyesore!

#9:  Chevy Sonic:  Nothing much to see here, a sort of squashed forward retch-tangle  that looks like someone stepped on a shoe box.  Offensive mainly because it is so non descript, it disappears unless ordered in an ugly color (like this one).  This one stands out like Cheetos puke at a society party.

#8:  Hyundai Veloster:  Instead of leaning forward, this car seems to slouch backwards.  Some designer trainee stuck an air foil on the back, and then added two designer features that resemble frogs nostrils over the front and rear tire wells.  This in an ill advised attempt to make the car look sporty.  With a 1.6 liter engine and 135 HP engine this thing will never be remotely sporty.  Slow and ugly, no way to win the race Hyundai.  (I looked up the word Veloster, it means- absolutely nothing).

#7:  Ford EcoSport:  What is it about mini SUV’s that so confounds car designers?  So many of them serve as a reminder that Man is capable of both the sublime (Jaguar XJ, Ford Mustang) and the profane (this wretched looking clunker).  The back of the car, which clearly has no cargo space whatever, is hiked up like someone is giving it a wedgie.  Back to the CAD machine guys!

#6:  Nissan Versa Note:  Hey, I get it, making an econobox that looks like anything is tough.  But there are cool small cars out there, it’s just that this isn’t one of them.  It looks vaguely like the sort of shoe that hipsters in places like Brooklyn wear to unsuccessfully look less dweeby .  The headlights stand up from the hood like cowlicks on a fashion model. 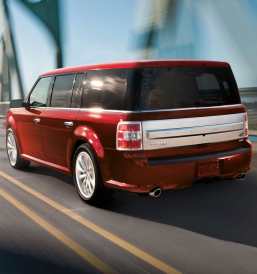 #5:  Ford Flex Crossover.  So the designers at Ford were sitting around huffing automotive paint and lacquers, and someone said, “Hey, let’s make a car even uglier than a Land Rover!”  And so they did.  Hard to imagine ever picking up a girl in this baby.

#4:  Range Rover Evoque:  Again, the designers just don’t know how to make an SUV that looks good.  This car looks like a giant stepped on it.  The convertible is hilarious looking, but somehow not as ugly as this travesty of automotive design.

#2:  Toyota Camry.  Unbelievable because this is the best selling car in the US!!  So lame, boring, and humdrum, it practically defines laziness and sloth in design.  The Chevy Malibu and Honda Accord, which are close in price, are so much better looking it’s like putting Melissa McCarthy into the Miss Universe pageant.  Although not overtly ugly, it offends this snarkster because they sell so many, they could afford to hire a competent designer dammit.

#1:  Grand Prize Loser.  Toyota Prius.  I almost did not include this visual offense to the ocular senses due to its strangely insect like design.  This is because they deliberately made it ugly so its owners could feel smug in their planet saving sensibilities.  However, this shows that when car designers set out to make ugly cars they can succeed beyond their wildest dreams.

Congratulations Toyota you have designed the three ugliest cars on the road today.  Clearly you are saving big Yen (probably more like tens of Yen)  in car design salaries over there in Tokyo.

I add in closing how depressing it is that Toyota proves that most Americans don’t care what their car looks like.   We invented chrome tail fins and the Corvette (any year)  and the Tojo’s of the Tiresome cleaned our clock.  I guess this explains the sartorial splendor on display every day at WalMart.  Tragic.