Warning:  This blog is disgusting, even to its author.

A Japanese man has posthumously been awarded a lifetime achievement record by the Pornography industry.  You see, apparently this man (named only Jogi to prevent his family and friends from laughing uproariously at them when they appear in public) was a serial wanker.  One day recently, his favorite self indulgence had him so excited that he wanked for joy, which unfortunately toppled his repellent skin magazine collection over and turned him into a porno pancake.  There is no documented proof that in death his face was frozen into a tight grimace, such as one might see on an actor in one of his SIX TONS of sleazy magazines. 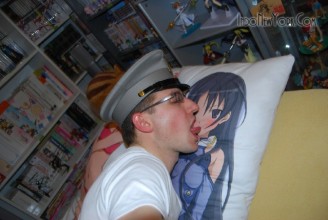 One really has to recognize (but actively revile) a man so dedicated to self pleasure that he acquired six tons of skin mags.

When he died, “Jogi” (did he call his member “boo boo”?  Sorry, that is an inside Hanna Barbera joke)  was 60 years old.  Supposing that he did not start collecting stroke mags until the age of 20, (when surely his aggrieved parents threw him out of the house with his first 3,000 publications,) he was collecting for 40 years.

I think a moment of helpless sniggering is in order in recognition of this accomplishment, followed by hours of hilarity thinking about the creepy life he led.  I hope no one ever had to shake hands with this guy.  On the plus side, surely he never had to worry about getting callouses, or buying dinner for a female, right?

Anyway, assuming that taking care of his own needs (spanking the monkey) was the goal of this prodigious outlay, and again assuming he took at least one “active interest’ (rubbing one out)  in each dirty magazine, you come up with an astounding  world record of 36,400 flogs of the log, assuming he only took interest in each mag once and never consulted any online sources for this activity.

Random Question:  How do you describe the facial effect of this particular activity when someone is already Japanese?  Do they “Really Think I’m Going Chinese, I Really Think So” as alluded to in the wonderfully offensive song by the Vapors released in 1980?  I really have a good chuckle believing that, so I really, really hope so.

Anyway, I like to think that Jenna Jameson and Larry Flynt flew in for the funeral (I hear he was buried with his favorite copy of Hustler) and threw ceremonial jars of KY on his grave.  Speaking of KY, surely he has a ‘frequent flogger” discount with them?

There you have it, our skeevy but hilarious story of the week.  I suggest the following names for awards for the new, annual “Most Wanks” award:

In closing, I nominate the President of North Korea, Kim Jong Un, to be the ceremonial host giving out this award.  It is hard to imagine a bigger jaggof than him, after all.

There, I was able to use up many of the funniest slang terms in common use for this underground activity.   Feel free to respond to this with a comment and nominate your favorite additional slang terms for meeting Rosie Palmer.

Although this guy is unlikely to ever have produced offspring, surely this is a Darwin Award Nominee?  The world won’t miss this vile and odious wanker.