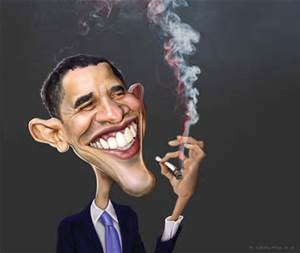 The real motivation for Obama’s trip to Cuba

Our esteemed president, and linkster in chief, went to Cuba a few weeks back.  The visit was hailed as “Historic” by virtually every news major news network or newspaper, many of whom lauded his willingness to normalize relations with the bearded communist dictatorship which runs the ramshackle place.

At first blush, it makes some sense to end our mutual isolation.  After all, the country is just 90 miles away, close enough for thousands of people less enamored of the healthcare system than Michael Moore  to row an inner tube across the Atlantic and become instant US citizens.  Cuba is closer than such alternative vacation destinations as Puerto Rico and Jamaica, although further than the Bahamas and Bermuda.  There are over 11 million beneficiaries of the friendly and benevolent Cuban governance, which would make Cuba our seventh largest state (after Ohio).  Their economy is $212 billion, would make them our 26th largest state by economic output, (larger than Alabama but smaller than Oregon).  Cuba is a therefore a significant neighbor, after all.

However, the puzzle is what exactly we would be getting from Cuba that we do not already have.  According to Wikipedia, Cuba’s major exports (excluding major league ballplayers, future presidential aspirants, and communist ideology) are sugar, nickel, tobacco, fish, medical products, citrus fruits, and coffee.  There is expected to be a stampede to build up the tourist trade, with new hotels, beaches, etc. anticipated.  I hear they make good rum.  Yo ho ho, and all that.

However, I conducted extensive research to see if any of these potential trade goods and services are in short supply here in the U.S.  (I am too lazy to conduct much non-Wikipedia research, so a trip to the nearby shopping center and some web searches are the extent of my exertions here).  Walking through my favorite local grocery, I noticed that sugar is in abundant supply, cheap.  A pound costs a few bucks, and we provide price supports at that.  They had more fish on offer than they could sell today.  No shortage of alternatives or supply.  We are spending billions to stop people from smoking, including paying farmers to grow something else.  So we really don’t want the tobacco, except a few of their cigars I suppose.  I am not sure what is meant by medical products, but a quick walk thru the CVS makes me feel like they are unlikely to offer much that we don’t have already.

And you can imagine, there is no need for additional sources of citrus fruits or coffee.  The shelves groan with so many types and flavors of coffee, it would blow the mind of Juan Valdez the coffee guy if he happened to blunder into the typical US grocery store.

BTW, It is hard to imagine, but Cuba is apparently a banana republic which does not even grow any bananas!!  Amazing.

My local liquor store has over 100 different choices of rum.  You can get it cheap, expensive, flavored, in plain bottles or fancy ones, just about any way your drunken mind can imagine.  There were no out of stocks, no “run on rum.” So Cuban rum is not exactly a highly differentiated commodity, and importing it addresses no obvious compelling shortfall in variety.

That leaves nickel, maybe we have a shortage of that? But no, a quick internet search reveals  that the price per pound has fallen from $11 a pound five years ago to about $4 a pound today, indicative that we have plenty.  So Cuban nickel can’t be the answer.   Another handy link, below.

As for tourist hotels, correct me if I am wrong but I have never felt that we could not get a beach hotel room, in prime season, somewhere within flying distance of the East Coast.  Florida has a huge range of hotels, from trendy $2.500 a night rooms at the Ritz, to mold ridden flea bags renting for $35 a night.  Tired of the same old US culture as you are experiencing there in Dustbin, Georgia or ColBeah, Mass? You can fly to the Bahamas or Mexico and stay at an all inclusive for $1200 a week.  I have not heard of them running out of rooms there.  And  you want a culture and architecture similar to Cuba, but without the abject poverty and police state?  Head to Puerto Rico, same culture and architecture as Cuba, and they will be happy to have your business there.  And you don’t even need a passport!  So hotel rooms in Cuba will only mean fewer hospitality jobs in Miami Beach and San Juan, unlikely to produce any net new economic benefit.

So we have established that Cuba does not really have anything that we need, except a few gifted ballplayers, (although we would be depriving US citizens or Dominicans of high paying jobs, just saying).

So finally we return to the conjecture about Obamas real motivation for spending three days there.  Noteworthy is the fact that he has spent more time in Cuba during his presidency than he has spent in Russia or China, which are you know, somewhat important geopolitically.  (He has visited France six times, so he has presumably added to his wine cellar).  So why the attention paid to a low rent, shabby, hostile, communist country?

We here at the Billy Bushwood Institute for Foreign Policy Studies have the obvious answer.  Barack has played golf a mind boggling 270 times while in office.  (The source I used keeps a running total, so click the link to see if he has added to his total since I authored this column) 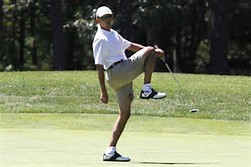 We all know how tough it can be to get on at Augusta or Pebble, and the greens’ fees are outrageous!  But our POTUS is ever thinking ahead, and we here surmise that he was actually visiting sites for the secret pre-planned Barack and Fidel Masters links.  Obama surely figures that if he lends his name and prestige to the club, they will comp him fees (including the cart!!) and get him on at the coveted 8:00 a.m. time slot.

Additionally, our Stoner In Chief, founder of the famous and prestigious Choom Gang club back at his private high school, undoubtedly wants to get access to some high class weed.  Cuba is well known as a leading drug trafficking country, and we at the BBIFP assume he will be assured a gratis supply during his visits to his namesake golf course.  (Is that really a Cuban cigar, or the world’s largest doobie he has clenched between his teeth out there on the 10th tee)?  He likely can get some killer blow also, as Cuba is a favored transit point for the narco trafficers moving cocaine from Columbia’s poppy fields.  How better to take the edge off the trauma of running the most powerful country in the world, than 36 holes on the waterfront, with unlimited weed and coke?  And rum and cokes also, to wash it all down with? Admit it, you are fantasizing about having this opportunity right now, aren’t you?  You degenerate..

Lastly, we here at the BBIFP assume that Barack is setting up a retreat to escape the clutches of his domineering wife Michelle and that overbearing harridan Valerie Jarrett.  He probably has an arrangement with the Castros that precludes either of them entering the country, meaning he can escape from them any time there is a convenient Havana connection through Miami.  (“I am so sorry, Mrs. Obama, but we have misfiled your entry visa.  I am sure we can clear it all up in just a few weeks…).  And who can blame him?  Did any of you catch the look he got from Michelle when he was attempting to hustle up some Danish PM trim a while back?  The picture of Michelle getting pissed at her flirtatious husband is priceless, but it is clear that he was unlikely to have scored with either the Danish Prime Minister or Michelle that particular day.  (Handy link below).  I am guessing that Barack might just step out some while Michelle cools her heels back in Chicago, and he is enjoying the tropical breezes coming off the Cuban coast.  Just a guess of course.

There you have it, another mystery resolved by the BBIFP.  Now you know why Obama spent three days there.

Literally minutes of research went into developing this story, so if I got any of this wrong please feel free to report it to Wikipedia, or possibly Valerie Jarrett.