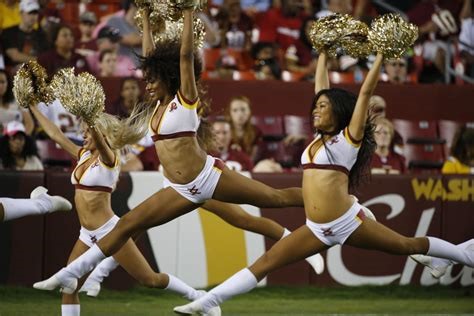 Please don’t call them the Redskins.

The team formerly known as the Washington Redskins today released picture of their new, coed dance team. The senior executives of the team got caught watching dirty movies made of their cheerleading team during tryouts. So they needed to clean up their disgusting, sexist image.

In order to somehow make scantily clad cheerleaders less misogynist and sexist (note: this is not really possible) the team announced that the entire cheerleading team has been fired.

Instead, there will be a coed dance team.

Above is a picture of part of the team, in which eventually as many as 67 different genders may be present. To make sure there is no prurient interest (in the traditional, heterosexual definition) in the dancers, ALL of them will be cross dressing.

This image shows them in their new, gender neutral and leer proof uniforms.

The result of course is that fans will lose interest in the squad, 50% of the females will be replaced by males, and people will still hate their inept loser of an owner.

Another brilliant management stratagem from the team too feeble to create a name for itself.