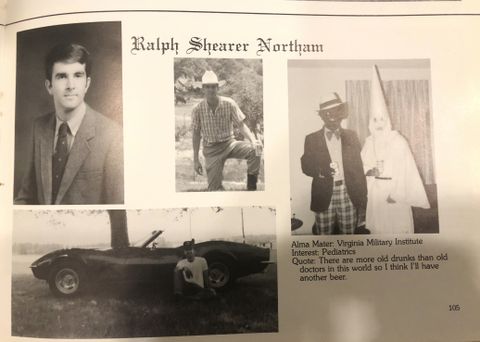 Well, I wrote this snark/blog too fast.  Now it turns out that the Attorney General Mark Herring wore blackface too, while a 19 year old undergrad at the University of Virginia.  He and his friends were rappers.  They were probably funny, but hey now we “know” they are racists.  So he is out now too.   I suggest the Democrats at the top of the power structure dress up in whiteface and pretend to be a mayonnaise group, like say the Doobie Brothers.  Will sustain them in their coming retirement.

I have amended my blog of last night to keep up with the ongoing mirthful merriment.

In the state of Virginia, political chaos and therefore hilarity ensues.  The Governor, previously known as a reliable Liberal but not otherwise controversial, decided to endorse 9 and ½ month abortion.  As a result, his med school roommate outed him as a Michael Jackson impersonator back in the day.  25 years ago.

He actually won a dance contest as Michael, (noted child rapist) which let’s concede is pretty admirable for a white guy.

For this sin, he has been ritually flogged as a racist. Apparently dressing up as a member of another race is now worse than being against Medicare For All or whatever.  Although in fairness, his nickname at medical school was “Coonman”.  So he might be a virulent racist.

On the other hand, it turns out that many, many comedians have committed this identical sin.  That is, having some fun spoofing another person or member of the opposite race.  This used to be known as comedy, but is now recognized as similar to Stalin starving 30 million Ukrainians to death back in the 1930’s.  After having committed such crimes, you have to give up your day job and become a non person, sort of like Anthony Weiner or Al Gore.  So time for “Coonman” to head to the great lefty scrap heap, to join Hillary and Joe Biden on the pyre of failed Democratic Politicians.

Meanwhile, the Lt Governor, Justin Fairfax, who is next in line to be The Gov, is now accused of rape.  As we know, we must believe all female accusations, so he is out too.

Old Text:  We can only speculate as the sins that the next guy in line, Mark Herring (attorney general) has committed.  My bet is on puppies in the wood chipper, or possibly having a lousy haircut.

New Text: So Mark Herring the next in line after Northam and Fairfax, now smells like a 5 day old version of his namesake fish.  As a known racist dressing up in blackface, he has to be tossed out of the Gov succession pool also.

We now know that the next guy in line is one Kirk Cox, the Speaker of the Virginia House.  In his picture, below, he looks like a guy who is has already measured the Governors office to make sure his desk will fit.  Let’s guess what politically incorrect crime he committed in his youth.  How about “mooning” a bus full of church ladies while in High school? 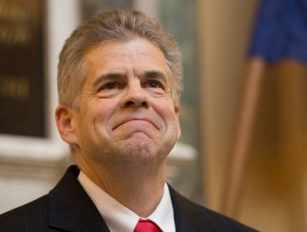 So have a hearty laugh at the expense of the State of Virginia, famous as the home state of the most presidents in our history.  Heretofore admired as a fairly sober, purple state full of reasonable people living comfortably off of the US government currency printing press.

Now they are clearly whackos that elect a rogues gallery of racists, rapists, and possibly  perverts who flash old ladies.

New Text:  So it seems that Virginia is even more screwed up than Illinois, where the governors office is inside the state prison at Joliet, to save transportation costs.  Possibly Virginia will move the governors mansion inside a local comedy club, and charge admission to their mockable Governance.