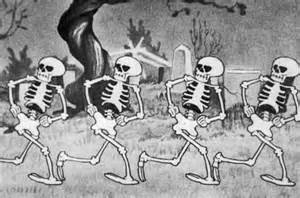 Frolic with the Long Departed in an Ossuary

While on vacation I had occasion to watch several episodes of the TV Program Bones, which features a bunch of highly attractive actors and actresses who work in a forensic lab, and spend their days up to their elbows in the entrails of various horribly dismembered murder victims.  In one of the episodes that I watched, our intrepid heroes exchanged pithy repartee while dipping their arms in a mixture of gore, wolf puke, and intestines while ignoring a human skull that belonged to the liquid corpse they were examining.

This show, and many others like them, are hugely popular.  Such shows as Bones, and the many CSI’s (Miami, Dallas, Bloomington, etc.) seem to depend on the ghoulish voyeurs who enjoy watching people whose insides are on the outside.  (If this describes you, sorry to have insulted you.  But you are pretty sick you know).

As always I am looking for ways to cash in on such phenomena.  Accordingly, I traveled the globe (via the internet) to discover ways for the fiendishly macabre to further enjoy their mental illness.  I  have developed a travel itinerary that will take you wierdos on  a world tour of Ossuaries.  (No, an ossuary is not someone who underwrites insurance policies.  An ossuary is a structure or box that contains human bones).

An exhaustive investigation lasting ten minutes revealed 88 world famous ossuaries, where as few as one or as many as 130,000 human skeletal remains are interred, (link below).  Now, several serve a very serious, reverent purpose, to give a final resting place to the victims of large battles and wars.  One such place is called Douaumont Ossuary  , where the unfortunate victims of the battle of Verdun are housed.  There isn’t anything funny about this, and you can’t go inside, so it is not on the tour.

There is also an Ossuary that is purported to hold the remains of John, Jesus’s brother.  But it is probably a fake and in any case is associated with Jesus, so that is not on the tour, either.

Fortunately for my new travel venture, there are more interesting and creative ways that bones have been used to develop tourist attractions.  My favorite, (likely because it is the only one I have been to personally,) is the Sedlec ossuary  near Kutna Hora, in the Czech Republic.  First a word of explanation.  About 500 years ago, there was a huge silver mine at Kutna Hora.  It contained a huge portion of the wealth of  Greater Bohemia.  So naturally, dozens of land pirate armies invaded to try to steal the silver.  None succeeded,  but over the several hundred years various Dukes, Kings, Princes, and  Brigands tried before the silver ran out, and collectively 40,000 invaders died.

This left the locals with a problem, once there was no reason for anyone to invade anymore (Kutna Hora is out in the middle of nowhere in the CR).  The locals were religious, so did not want to be blasphemous by just tramping around and on top of the dead.  They had to move the bones off the fields, so they could plant wheat, or corn, or peyote, or whatever.  Now, without silver there was no industry left, and no one bothered to visit the area anymore, (not even thieves).  But the local friars studied this problem and someone enterprising member thought, instead of just burying the bones in a big pit somewhere, let’s make them in to really ghastly and macabre artworks.  Then we can charge tourists a few bucks to see the results.  And so they did.

Now the town of Kutna Hora attracts hundreds of thousands of sickos (like me!!) annually to somberly and slowly shuffle in and either walk in reverence around the skeletal statuary, or fail to completely stifle the sniggers and snorts that such an absurd display presents.  I am sure it will come as no surprise to my faithful readers that I fell into the latter category.  And I think that all those entrail-loving Bones watchers will literally eat this place up.  They should open a surgery center next door!

As you can see from the attached pictures, the good friars had some fun putting together the bone sculpture garden.  Depending on your religious upbringing and appetite for the ghastly, you either find this a reverent way to depict the dead, or get sick secret thrills out of your tour.

As it happens, there are similar ossuaries located in the Paris Rome, Palermo, Brno, and many other cool places.  The rumor is that word of the moolah the fathers in Kutna Hora had were minting off of the dead would-be silver thieves got around, and other monks set about building similar displays. While they don’t cost that much to enter, (about twenty bucks typically), you often have to take a bus to a remote location.  So realistically, you have to be so committed to looking at skeletal artwork that you want to blow big bucks on the round trip bus fare, plus a whole day of your vacation.  But as we have already established that you have deep seated psychological issues, so such an expenditure of time and effort will be no barrier to you.

So email to: docdeath@bbushwoodtravel.hades for your free travel brochures.  We will require your release papers from your most recent sanitarium stay.